We were sad to hear of the recent death of Derek Grayson after a long battle with illness.

For the old Grayson hands he was known to all as “Mr Derek” and his brother “Mr Gordon” throughout their long careers.  Derek qualified from Cambridge and then did his National Service as an able seaman based in the Mediterranean.  Upon his return he joined his father’s firm where he worked until retirement.

When we split from Graysons and set up Grayson Willis Bennett – Derek was supportive and allowed us to retain the “Grayson” name.  He retained contact from then on.

A real gentleman solicitor and one of the last of the old guard – he will be remembered fondly. 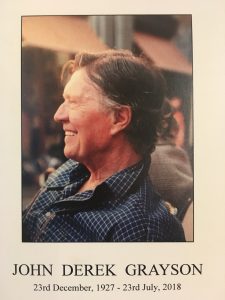